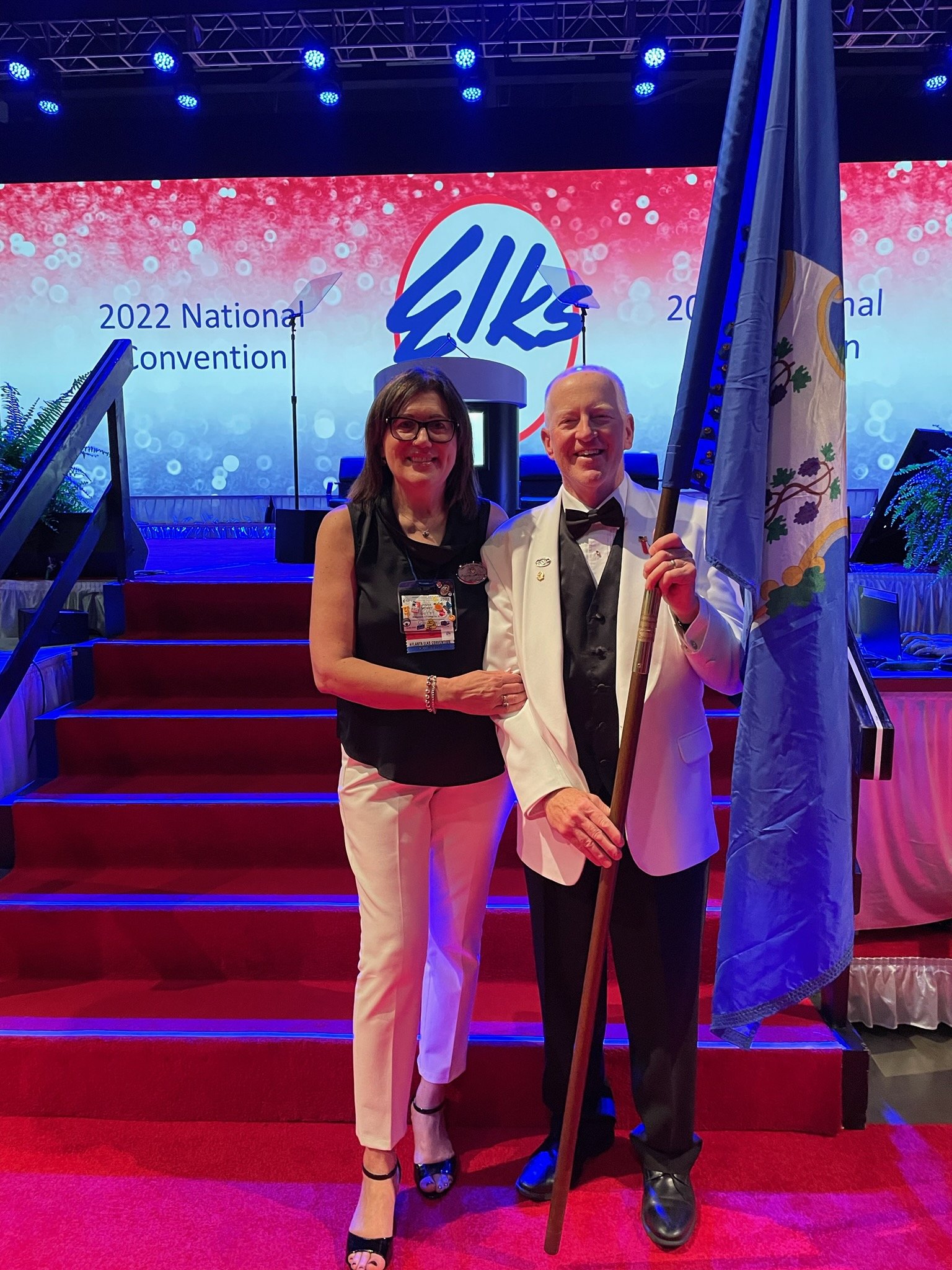 President Jim Money is pictured with his wife Ivana.

We are the Connecticut Elks!

We have a proud past that will help us grow through this year and into our future!

Here’s what we have built: thirty lodges are spread throughout the friendly confines of our Great State. With over 21,000 members strong, starting with the mother lodge in the center of our State, Hartford Lodge #19, through each of our four districts, it gives me great pride as the State President of the Connecticut Elks Association to welcome one and all to our website.

I joined this great fraternal organization in 1991 at the Bridgeport Lodge #36 and jumped right in as an officer. I served as Exalted Ruler in 1996 and 2001 and have been an officer there ever since. I served as District Deputy in 2005, State Chairman for Membership and State Chairman for the Elks National Foundation. I am now on my 18th year on the Board of the Connecticut Elks Association.

Connecticut has played a pivotal role in Elk history over the years. It was in 1927 that our very own Meriden Lodge No. 35 endorsed the candidate for President of the Benevolent and Protective Order of Elks, John F. Malley. President Malley first proposed the creation of the Elks National Foundation, our philanthropic fund. This charitable trust gives away over $36 million dollars per year to support Scholarships, Local Communities, Youth Events, Drug Awareness Programs and our Veterans.

The Elks of Connecticut developed and implemented the National Soccer Shoot program. This phenomenal program was the brainchild of Past Grand Loyal Knight Francis A. Joyce and Past Chairman of Grand Lodge Board of Trustees Robert W. Hansen, both members of New Britain Lodge No. 957. This program teaches our youth the values of sportsmanship while allowing them to compete and succeed at all levels.

Our State is coming off a very impressive year in every way and we learned that by staying together as a family we can go a long way!

Membership numbers showed another gain, Elks National Foundation had all lodges meet the per capita goal, Lodge Activity Awards, 1st place National Awards in the Community Projects Contest for Putnam Lodge # 574 and for Middletown Lodge #771. We surpassed our per capita number for Major Projects thanks to all the contributions from our lodges and also record numbers from our Bowling and Golf Tournaments. All in all, one heck of a year.

So, what will we do after all of that?

We take that momentum and we look to improve on them! And why can’t we? We had a great State Convention and had the pleasure of meeting our incoming Grand Exalted Ruler Bruce Hidley and soon to be First Lady Helen from New York. We were able to see firsthand their passion for getting to know their neighbors here in Connecticut.

Onward we traveled to Atlanta, Georgia for our National Convention. I had the thrill of proudly carrying our State Flag during the opening ceremonies. Our members in attendance wore their Connecticut colors to help celebrate the election of Bruce Hidley to his new position as Grand Exalted Ruler and I as your State President was proud to be part of his escort team to the podium. It is there that he introduced our new theme for the year which is, “Promoting Elkdom with Enthusiasm!”

What are our challenges? Not only trying to meet and/or surpassing so much that was accomplished last year and the years before, but also taking on new challenges; most notably our Major Projects. Not only do we keep the Connecticut Children’s Medical Center as our focus, but we have now increased our commitment to the Special Olympics of Connecticut to co-major project status.

Because of our long-term relationship with both great organizations and the understanding we have for the great people that are the beneficiaries, how can we not enthusiastically rise to the challenge!